3 Ways to Make Sure You Avoid Hashtag Abuse 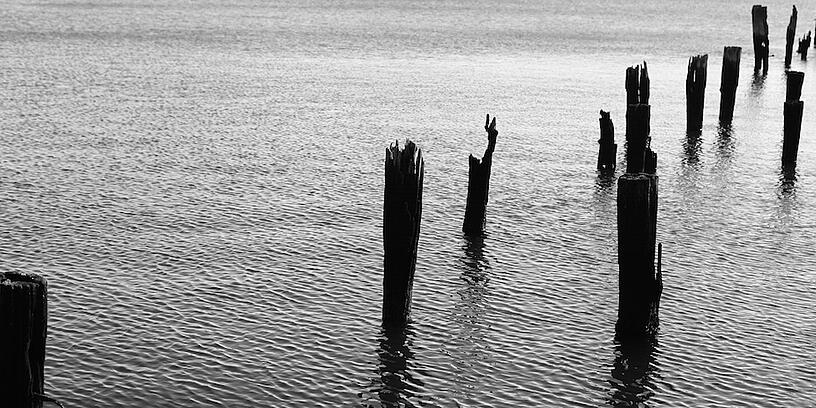 Have you noticed that you can barely go anywhere these days without seeing hashtags? They’re on the packaging for your favorite brands, they appear in the corner of your favorite TV shows and, believe it or not, they’ve even showed up on articles of clothing.

In fact, hashtags are so common in our world nowadays that when my husband wrote “Question #1” on the whiteboard in his 4th grade classroom earlier this year, his students asked him what “question hashtag one” was, and told him they were confused because they couldn’t click on it to find out.

Yes, hashtags are indeed everywhere, so it should come as no surprise that, as with any prominent technological advancement, there’s a lot of room for error when using hashtags. How can you be sure you’re using hashtags properly and getting the most out of them? We’ve got a handy list of tips to help you avoid incorrect use of hashtags:

1. Make sure you’re using hashtags on the right networks

Hashtags are supported by a handful of various social media networks, most notably including Twitter, Facebook, Google+, Instagram and Vine, but most B2B marketers use a combination of LinkedIn, Twitter, and possibly Facebook when it comes to social media marketing, so let’s focus on those three.

LinkedIn is the only one of the major B2B marketing networks that doesn’t support hashtags, giving them zero functionality when used in posts. Instead, the biggest player in the hashtag game is Twitter. In fact, the modern hashtag as we know it was born on Twitter when Chris Messina, a former Google designer, proposed using the pound symbol to group tweets in 2007.

Hard to believe that single tweet turned hashtags into the powerhouse they are today, isn’t it? Of course, it didn’t take long for hashtags to catch on, grouping tweets together that are based on similar conversations and topics to make things much more organized and easy to find on such a busy social network.

More recently, Facebook started supporting hashtags. Even though a hashtag will hyperlink properly, hashtags just don’t seem to hold the same value on Facebook that they do on Twitter, especially for a B2B social media marketer. Instead, Facebook hashtags tend to be used for more human-interest stories and breaking news, since the network is more widely used as a place to interact and keep up with friends and family members instead of researching a great commercial insurance provider.

2. Make sure you’re using relevant, “real” wording in your hashtags

The beauty of hashtags is that they not only add your post to an organized group, but they enhance the ability for you to be found in search, as well.

Let’s say, for example, that you tweet out a link to your latest eBook and include “#InsuranceTips” in your tweet. That hashtag becomes a live link, so that anyone who searches “#InsuranceTips” on Twitter or sees that #InsuranceTips in a different tweet and clicks on it, will find your tweet among others that included that very same hashtag. 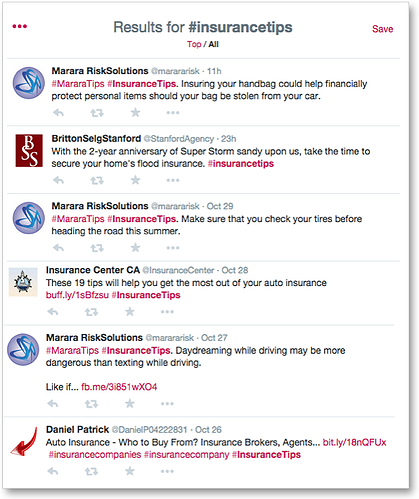 A good guideline to follow when thinking about how to word your hashtags is to make sure that you find the sweet spot between generalization and specification. Sure, you might feel compelled to hashtag #SomethingReallyLongAndSpecific because it makes sense for the blog or content piece you’re linking to, but ask yourself this: who’s really going to search for that term? What conversation group will it get added to?

At the same time, if you use a hashtag that is too general (i.e. #insurance) you run the chance of getting lost in the crowd, having your tweet added to an incredibly large conversation that rapidly grows with each new #insurance tweet (and there’s bound to be a lot of those). Instead, add another qualifying term such as #InsuranceTips as seen above or #CommercialInsuranceTips.

If you’re unsure of how a certain hashtag might perform, or whether or not it’s relevant, a good trick of the trade is to search the hashtag (either directly on the social media site that you’ll be posting to or on a third-party site such as Tagboard) to find out whether or not there are conversations around it already.

3. Make sure you’re not “hashtag jacking” 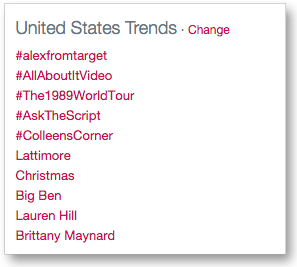 For example, based on the list of trending topics above, you could create a tweet saying something along the lines of “Did you know that X% of businesses in the US are underinsured? [Link to blog] #ColleensCorner”, but your post likely won't draw any attention from the people who are clicking on that hashtag and engaging in that conversation. Plus, including an irrelevant hashtag takes up precious real estate on your social media post – especially on Twitter where you're limited to only 140 characters. Make sure you use your social media space wisely and use thoughtful, relevant hashtags that will draw attention from the right group of people.

Using hashtags can provide a great benefit to your social media efforts, expanding your overall reach and connecting you with a wider audience, but the key is to make sure you're using them correctly. Avoid making the common mistakes above and you'll be in great shape!

Laura is a detail-oriented consultant and project manager, with a background in public relations, social media engagement, and client content creation. Prior to her time at Weidert Group, Laura managed PR for an industrial services company, and maintains a strong focus on earned media within our inbound marketing programs.