Twitter Just Switched to 280 Characters. What Does That Mean for Businesses?

Tired of your tweets getting cut short by the 140-character limit? Worry no more! If you missed the news last week, Twitter has doubled their character count, raising the limit to 280. These changes are now available for all users on the social network, after initially testing the longer tweets with a select group of users back in September. This is undoubtedly the biggest change the social network has made since its launch in 2006, and so far, it’s been met with mixed criticism.

Is 280 Characters Too Much?

With Twitter being such a polarizing social network—people either love it or they hate it—any big change is going to be met with a wide range of reactions. For the fans of Twitter, one of the biggest perks of the social network has been its brevity and conciseness. Users enjoy not being bogged down by paragraph-long social media updates, making it easy to scroll through the newsfeed quickly and not miss a beat. With longer updates, users have to slow down and take time more time to consume the information, making the longer tweets “more annoying” for some. 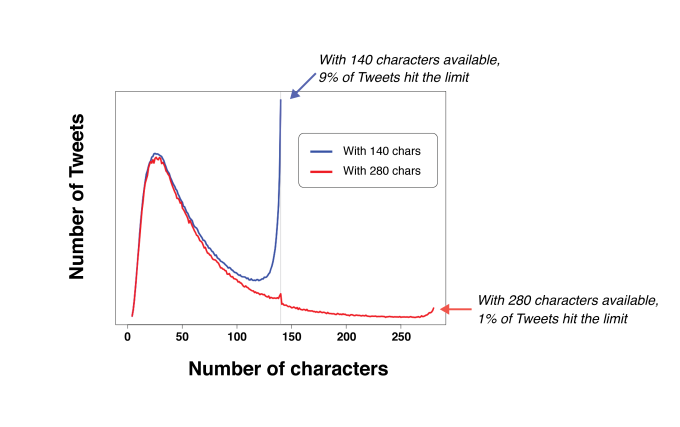 When looking at Twitter’s own data in the chart above, you can see that the majority of tweets consist of less than 100-characters, but even then, nearly 10% of all tweets are hitting the 140-character limit. This is even after Twitter made changes to not count links and media files towards the character limit. So while it’s clear that shorter tweets and concise posts rule the network, 140 characters was just too limiting for too many people.

Does This Mean Longer Tweets Will Be the New Norm?

If you’ve been on Twitter in the last week, you probably noticed a lot more tweets that were closer to the 280-limit than the old limit of 140. In fact, you probably saw quite a few tweets like this one:

Twitter anticipated this, however, as data from their trial back in September showed that many people tweeted the full 280-limit because it was new and novel, but soon returned to relatively normal tweeting behavior, with only 2% of tweets from the trial going over 190-characters.

How Should Businesses Use the New Character Limit?

Now that we all have #280Characters, we expect your Twitter complaints about specific calls against your favorite teams to be calm, well-reasoned, and full of complete sentences. Thanks in advance for this positive step forward in basketball officiating-related discourse."

For businesses, and B2Bs in particular, the new changes are likely exciting because it gives you more freedom with your posts, as well as more real estate in the newsfeed. And while it’s okay to join in on the fun at the start, as the novelty dies down and people return to their normal tweeting behavior, the 280-character limit needs to be used responsibly. Don’t just tweet longer tweets because you can; tweet longer tweets because it makes the information you’re sharing better.

Whether it’s a fun post like the one above, or just sharing an interesting quote from your latest blog article, there are many ways businesses can take advantage of the longer tweets without being seen as annoying. If long industry keywords made it hard to stay under the 140-character limit without using lots of abbreviations or acronyms, for example, the new limit should help you get everything out there in clear, full sentences. If you ran out of space trying to include the tag of the author of the article you’re sharing, make sure you don’t forget with the new limit. Remember, you don’t have to use the full 280, and really shouldn’t change your normal tweeting behavior too much; just try to use it when necessary or you need a little extra oomph for your tweets.